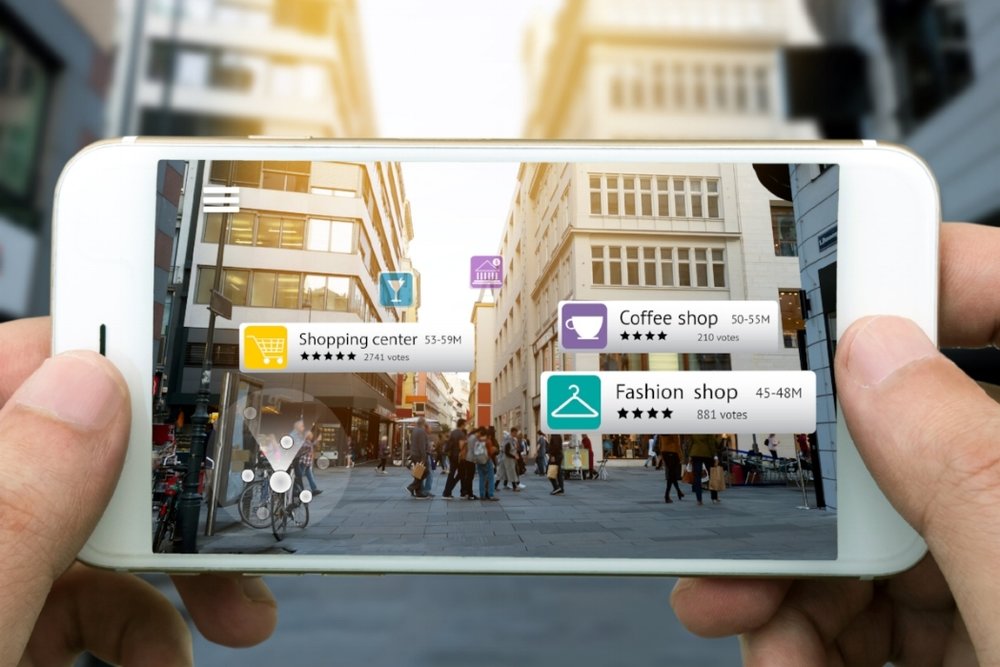 Off the cusp of our recent publication—if you haven’t already read part one, you can do so here — we’re moving on to talk about one of the most versatile and transformative technologies in the current landscape: Augmented Reality.

The total economic impact of VR and AR technologies has been forecasted to reach 29.5 billion by 2020. It’s a massively successful technology that is making an impact in nearly every industry from retail and manufacturing to consumer entertainment.

Compared to some of the other tech that’s out there, augmented reality is really the true driver of the immersive experience, something integral to the modern experiential engagement campaign.

The real point here is that if you want to deliver a truly immersive experience, augmented and virtual reality technologies are the way to go. And what is experiential engagement if not immersive?

Moving forward, it’s also important that you understand the difference between augmented and virtual reality technologies.

To keep this short and sweet, VR or virtual reality involves an experience that is wholly immersive. You—the user—essentially enter a new world or whole new environment, delivered through an audio and visual experience. VR is generally powered by an all-encompassing headset such as the Oculus Rift, Playstation VR, or HTC Vive. The headset covers the entire head, including the user’s eyes, ears, and upper neck. Head-tracking support is offered, so when you move or swing your head in real life, it’s translated to the digital space.

AR is a bit different. It does involve the use of digital and immersive experiences, except they are overlaid in the real-world. There are several ways this can be done, some of which just aren’t viable with modern technology. This includes holograms, visual displays, portable devices and more.

Google Glass is one of the most popular instances of augmented reality. Glass was essentially eyewear or glasses that present digital content in the real-world a la navigation details, weather and news updates, and more. It is an ideal example of the wearable form of AR.

Day to day apps in our phones are becoming increasingly popular gaming apps like Holo, Ingress, Sun Seeker, and earlier incarnations of apps like Yelp Monocle for example. Of course there is the instafamous Pokemon Go app, that leverages your devices camera a variety of sensors to display content in the real world. You’re not actually catching monsters or seeing them roam around the streets, it’s all happening in a digital space.

The technologies differ in approach, but also in application, as well. Augmented reality, for instance, can be used in a wider variety of scenarios. You wouldn’t want your construction crews stumbling around a worksite with their heads covered by a VR headset. A pair of AR-enabled glasses, on the other hand, would be super convenient and helpful for them.

In experiential engagement, AR is used to facilitate new, digital experiences to engage with customers in a multitude of ways. This sounds vague, but let’s look at an example of the technology being used by a real brand.

IKEA offers an AR-enabled mobile app, for instance, that customers can use to visualize and test furniture in their home or various environments, before purchasing the items from the store. You take the app on your phone—which displays a digital representation of the company’s furniture and goods—and use it to map out your home or apartment. You can see what a new couch or bookshelf looks like in your living room or be a little more crazy and put that same couch or piece of furniture on a busy, urban street.

It’s an ingenious way to utilize augmented reality and provides customers with a personalized, yet modern experience that helps them pseudo-experience your brand, product, and services.

Is there a demand for the technology, though? Let’s put it this way. In 2016, there were 150 thousand shipments of AR glasses, a total that’s expected to grow to 22.8 million units by 2022. Consumers are clamoring for the kind of mixed reality experiences that AR can deliver.

It’s obvious that most technologies—augmented reality included—have separate use cases for the consumer and business sides of the market. Pokemon Go and Draconius Go, for instance, are AR-enabled mobile games designed to keep consumers entertained. They don’t necessarily market or promote anything, other than the experience they offer that is.

When you employ AR for engagement, however, it takes on a different meaning. Ultimately, you aim to deliver an immersive and personalized experience, yes, and one that every user will hopefully remember. Except, your underlying goal is not to provide entertainment or keep the customer occupied per se. It’s all meant to achieve a particular goal or purpose, like enticing them to buy a product, visit your store, or even interact with your booth at a major event.

It’s this idea that applies to the concept of addressing user gaps. What can you show them through AR that can help advance them through the various levels of engagement from awareness to consideration and so on.

You need to be sure that you understand both the platform you’re using—augmented reality in this case—and the customers that you will be engaging with. They want to be wowed and delighted, but they also desire a personalized, relevant experience. They want to see innovation, but more than that, they want to see how innovation and transformative ideas are going to change their own operations and business experiences.

The modern digital revolution or call for innovation means you need to be ready to engage in new, delightful, and maybe even mysterious ways.

Augmented Reality: Why It Matters from a Business Perspective?

The concept of entertainment is, in and of itself, relatively straightforward. But in the world of business, your goals are often much more complex. You want to sell a product, promote your brand, branch out and find new customers, tease an upcoming launch, or any manner of similar events.

How can augmented reality be used to do these things? How can the technology be adapted to deliver a truly successful marketing moment, experiential or otherwise?

To better understand, we’re going to explore the idea of deploying augmented reality in company headquarters for executive level meetings. What you’ll want to pay attention to is the connotation or context with which the technology is used in these hypothetical scenarios.

Using AR in the Enterprise

The true beauty or convenience of augmented reality is that you’re blending physical with the digital. In terms of opportunity, this allows you to essentially do anything you would do in the digital world, in the physical, real-world, and vice versa.

Let’s say you absolutely have to meet with stakeholders or partners, but don’t have the time or resources to make it happen. You—and everyone else involved—can don a pair of augmented reality glasses and immediately enter a local meeting environment. Imagine meeting with personnel face-to-face, when they are actually hundreds of miles away.

This lends credence to the idea of a virtual presence. You can use augmented to overlay or create a virtual presence in the real world. Or take it one step further and let’s say you are able to meet in person, but you have large campus you want customers to experience when they come on-site. Pre-meeting you can take them on a virtual tour with a digital campus host or self-guided exploration filled with interactive overlaid touchpoints.

But this doesn’t just apply to people, it also applies to things, or experiences. You can test prototypes or get a feel for a particular object looks in front of you. More than that, you can manipulate the virtual content which means rotating, resizing, or interacting with it. From a goods and products standpoint, you’re making that item relevant in the here and now.

If you’re in the tech space and selling servers or other hardware that gets installed, you can give your potential customers a sense of where and what would be placed around the physical environment and they can measure it up in their augmented world.

Find your meetings boring? No problem, you can spruce things up a bit by gamifying the experience. Introduce a fun gaming component to meetings by allowing personnel to earn achievements, chase high scores, or even interact with one another in new ways. Team building virtual laser tag anyone?

When you think of integrating these more advanced technologies to put your spin on experiential engagement in the enterprise, consider this starter kit to get the creative juices flowing.

Honestly, we’re merely scratching the surface here. Virtual reality, by nature, can deliver even more opportunities on this front, but AR is also highly promising. The sheer potential of the technology means we will probably never have a full picture of how and where it can be applied in the business world. Don’t be afraid to branch out and think outside the box!

One topic we have yet to touch on is the potential AR and VR technologies offer to modern data and analytics teams. AR can be a remarkably useful and informative tool for displaying visual context data, not necessarily even in the real-world. You can use the technology to visualize patterns and trends, outside of a 2D environment. This might even enable you to find and discover new opportunities and information.

Imagine sharing a growth chart or CAG visual to your fellow colleagues and partners through an interactive, 3D presentation?

This gives a whole new spin to the idea of modern business analytics and business intelligence, which makes the technology that much more viable in the enterprise sector.

If Pepsi Can Do It, You Can Too

PepsiCo created an immersive, unique AR experience that led commuting Londoners to believe they were being attacked by aliens, witnessing an escaped tiger, and even seeing a crashing meteor. How, you ask?

They built a seemingly two-sided display into a bus pickup stall. When looking at the display, Londoners thought they were looking through a pane of glass. In reality, they were looking at a real-time digital display of what was happening on the other side. Pepsi used this to their advantage to show various events happening on screen, overlaid in the real world. The results are both magical and hilarious. You have to see it for yourself.

It’s a great example of how the technology can be deployed to immerse even random passersby in your current engagement campaigns and events. Imagine rolling out several of these at your EBC and transforming the way people interact with your brand, on-site?

There are so many possibilities and so many opportunities. Of course, that’s a mere part of what makes augmented reality one of the most lucrative experiential engagement methods today.

The Connected Employee: At Home, At Work, In Transit

What Workplace Technology Can Do For The Return to Work

Your finger on the pulse of digital transformation and experience

Tune in to our CXApp Live! podcast for live and unfiltered conversations with practitioners and leaders in the customer experience and customer briefing space. The CXApp Live!